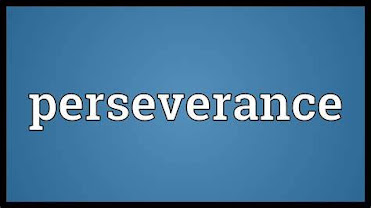 : continued effort to do or achieve something despite difficulties, failure, or opposition : the action or condition or an instance of persevering : STEADFASTNESS
I recently finished two books that made me think of the word perseverance. Both books were true accounts of war heroes. The first book was "On Full Automatic" by and about William V. Taylor Jr. and his tour in Vietnam. The second book "Damn Lucky" was written by Kevin Maurer about the service of John Luckadoo during WWII. Both stories are amazing and really put you smack dab into the middle of two historic times. Both achieved something despite tremendous difficulties, failures and opposition as defined above.
William (Bill) Taylor tells of his battles and hardships endured in the Vietnam War. His tour of duty was 13 months and his personal battle was to survive those 13 months and return home safely. He survived ambushes, booby traps, snakes. leeches and more to get to the end of his tour and return home. Each battle that Bill Taylor engaged in might result in the death of several of his friends and fellow marines. One of those had just found out his son had been born the day before he died in battle. Several died in their last month or two of their tour.
John Luckadoo's story involves his deployment to a B-17 bomber group. He has to survive 25 missions to return home. Out of 40 men he trained with and flew with in the 100th Bomb Group, only 4 survived the missions. He survived enemy fighters and anti-aircraft guns to finish his 25 missions. John Luckadoo returned from many missions in which 20 or more bombers failed to return with his crew. The odds were that only about 25% of crews made it to the 25 missions and returned home. He survived and turned 100 this past March! Their stories show their determination to persevere through their situation to hit those magic number of 13 months or 25 missions despite terrible odds of surviving to the end.
Their struggles and near misses demonstrate what we all are capable of in tough times.
In retirement, most of us don't come close to facing the situations of the two young men above where perseverance is at the highest level you can imagine. However, there may be numerous situations in which perseverance is a valuable tool during your retirement and your last 20 or more years on this earth.
In retirement you may have small situations that require short bouts of perseverance such as a repair or remodel of a part of your home, an unexpected car accident that you have to deal with, a family or personal relationship that has gotten off track for some reason, a financial hit to your budget or retirement funds and many other short term "tough" situations.
Also, during your retirement and last half of your life, you may endure much tougher situations involving death of family or friends and personal medical situations involving you, your spouse or immediate family. Major medical situations would be the most likely situations that might equal the life and death battles that the two men above endured. My wife has persevered and continues to do so with her breast cancer diagnosis. Her perseverance through chemo and radiation treatments has shown how tough she is while in a very hard situation.
During "Lucky's" missions, he talked of being scared to death as he walked to his plane for a mission. But, once he climbed into the plane, he knew that he had a job to do and he began to focus on the moment rather than possible outcomes. I saw this same determination in my wife. Once she was hooked up to her IV, she would even make a comment about having to do what she needs to do to be around in the future for the grandkids. To me, she had the same attitude of perseverance that the bomber pilot had and I have full faith that she will continue to persevere for the next 30+ years!
I need to remind myself daily about the tough battles that people are going through and the fact that my life is going pretty well even though small things get me down sometimes. There is always someone else out there who is persevering through some pretty bad times. As much as people grumble about the state of the U.S., I wouldn't trade it for anything. We need to think of the problems going on in Ukraine and Haiti to remind us of how great we have it right here. We also need to continue to remember the heroes like Bill and Lucky who helped give us this great life we have today!
Have you had to persevere through anything lately? Any big issues that really knocked you down for awhile, but now are in the past? Have you read any great books lately that are similar to the two I just read?
at September 25, 2022