In Charge For A Day 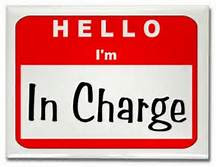 I started to title this post "If I were God for a day" but I didn't want that much responsibility. If God participated in "Take Your Children to Work Day", I can only imagine what I might do if I was put in charge and had unlimited powers for a day. Imagining such a thing is like thinking about what you would do if you won $100 million lottery.

If I were in charge for a day I would first eliminate all the deadly and damaging diseases that mankind has to deal with currently. Instantly, I would eliminate all cancers, alzheimer's, and other diseases that cause death and suffering. I probably can't eliminate everything we humans contract, so in that regard I would instantly make a cure for everything else. One simple pill or shot and whatever your are dealing with is gone.

If I were in charge for a day any intentional criminal acts will be redirected from the victim and back to the attacker. If a criminal intentionally shoots to harm or kill, the bullet will curve and inflict that damage on the shooter. The exception will be game hunters. I will still allow you to shoot straight to hunt your geese or whatever. The key will be criminal intent. If you are impaired on drugs or alcohol and decide to drive, you would only hurt yourself and your car. You would always be diverted away from hitting an innocent person.

If I were in charge for a day, I would make chocolate brownies have the nutritional value of cauliflower and vice versa. That way doctors can recommend you cut back on cauliflower and get three servings a day of the new healthy carbs.

If I were in charge for a day, I would make nuclear energy totally safe. I would eliminate the effect of radiation on humans so that the material was safe enough to hold in your hands but still able to provide endless and clean energy. (This one is a result of me watching Chernobyl)

If I were in charge for a day, I would make lightbulbs and batteries last as long as advertised. So, when you buy a LED bulb it really last 12 years, not the 1 year I seem to get out of them sometimes.

If I were in charge for a day, I would make the internet so fast that you would never see your streaming video get paused and that irritating little circle going round and round loading your video.

If I were in charge for a day, any accidents that would cause death or harm would be eliminated. If you fall you never get seriously injured or die from it. No one drowns or dies in a fire. I would make the cars so technologically advanced that they can't hit each other and cause accidents.

If I were in charge for a day, cell phones would not work anywhere in an indoor public gathering place. To use your cell phone for a call or watch a video you have to exit the area much like a smoker has to. I can't stand trying to have a nice meal while hearing someone endlessly stream TikTok videos in the next booth.

As I said, I would not want to be God and have the responsibility of this earth. And as I don't get the "big picture" to how all this works anyway, I would definitely mess it up if I was in charge for even a minute.

What would you accomplish if you were in charge for a day with unlimited powers? 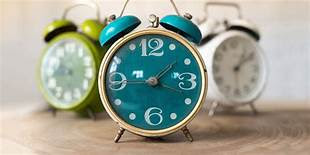 When my mother passed away in June of 2020, I was tasked with the huge job of dealing with her estate. This involved cancelling credit cards, contacting her pension and social security, dealing with her material things and a thousand other little things you don't normally think about. When cleaning out her house, my sisters and I divided her things into donate, discard or keep categories. In this process I found a small memo book that she had written down websites that she visited or wanted to visit and a variety of scribbled notes. But, on the inside of the cover she had written down four quotes she had seen somewhere and were important to her. I kept that cover and have it sitting on my desk where I see it everyday. The top quote is "The time you enjoy wasting is not wasted time". I will save the other three for future posts.

How true is that statement? "The time you enjoy wasting is not wasted time". How often do we look at what other people do and think to ourselves "What a waste of time!". If you are not a golfer, you probably think 4 ours a day golfing is a waste of time. If you are not a fisherman, you probably think an entire day of fishing is a waste of time. The list of wasted time is endless. We see our neighbors and relatives wasting time. We see people we don't know wasting time. We waste a lot of our own time sitting in a dentist waiting area or waiting in traffic. Even in those situations you could turn the wasted time into enjoyed time by reading a magazine or playing a game of Wordle. Don't do these things while wasting time in your car. I recommend good music for that one.

In retirement, we are supposed to be enjoying our newly found free time. Each of us has our own individual idea of what retirement looks like and have our own ideas of the perfect activities we enjoy. It is our time to enjoy the time. When you are enjoying what you are doing it is not a waste of time, it is a great use of your time. Wasting is not a good word for time you are enjoying, but it makes for a decent quote and makes you think about it a little.

I enjoy spending time on my metal detecting hobby. Some would say I'm wasting hours of time digging in the dirt for a few small coins. Like most hobbies, I certainly don't do it to make money. But, I enjoy that time a lot. I enjoy spending time working in the yard or just messing around in the garage with some small project. I can "waste" a whole day doing little things that bring me joy. A normal day might include me tightening a screw on the mailbox, trimming the shrubs, washing my truck, etc.  Another time waster that I enjoy is laying in the pool on a float and listening to music and the pool waterfalls. That is some highly enjoyable wasted time! During that time I am doing absolutely nothing and accomplishing nothing but enjoying every second of it!

Get out there and enjoy your time moment by moment and remember as long as you enjoy wasting time, it is not wasted time! 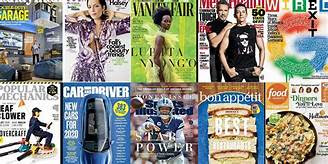 Remember when a subscription consisted of getting a monthly magazine or a daily newspaper? When I was young I had a subscription to Boys Life magazine for a year or two. My parents got Readers Digest, The Western Horseman and Good Housekeeping. We had a total of 4 or 5 subscriptions plus the daily newspaper. We also bought the Grit (newspaper) weekly from a kid who sold them. I think the only other things you could get at the time through a subscription were Fruit of the Month and collector plates, spoons, bird statues, etc.

I have always enjoyed flipping through the pages of a good magazine. We currently subscribe to numerous magazines. My favorites are National Geographic, National Geographic History, and Better Homes & Gardens. My wife enjoys subscriptions to Woman's World and a few other magazines for women and one or two cooking magazines. A lot of magazines have done away with their print version and just offer it in digital form. I browse through a few digital magazines through my public library account. I imagine that printed magazines will eventually become obsolete much like the Sears and JC Penny catalogues.

Now a subscription has become more than a magazine. You can subscribe to a streaming service, a food delivery service and any number of monthly packages that contain certain items. You can subscribe to getting a variety of boxes. You can get an Arts & Crafts box, an Awakening box, an Escape Room Game box, Crystal of the Month box, Marshmallow of the Month box, Kid's Craft box and on and on. When I searched subscription boxes, all of the previous came up plus many more. The costs can add up. The boxes range from $11 to $61 per month on those in my search. I'm sure they can go much higher if you go with wine of the month or any other pricey item. 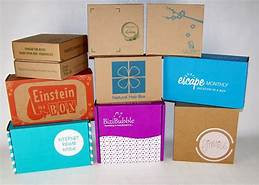 There is a huge convenience aspect to a subscription. Once you get it started you can sit back and enjoy 12 months or more of the thing you ordered. It comes right to your doorstep or mailbox and if you do the boxes, I'm sure it's like getting a Christmas or Birthday present every month!

Budget experts will advise you to review your subscriptions on a regular basis. This is sound advice for anyone on a budget and especially in retirement. Some forgotten subscriptions may be hidden within your monthly credit card bill and you may not pay attention. Carefully review your bills for a month or two and make sure you still need and enjoy your monthly subscriptions. Cancel those that you no longer need and save yourself a little money every month. You may even find a subscription or two that you began with a free trial and never got around to canceling.

We currently subscribe to the magazines I mentioned above, streaming services that include Amazon, Netflix, Hulu and Paramount+. My wife has an Ancestory.com subscription to do family tree research. If you aren't careful you can easily run up monthly fees in the $100's if you aren't careful.

I think the streaming subscriptions are a bargain if you find a few shows or movies on each one. Some monthly fees probably are cheaper than one trip to the movies. The boxes and food delivery seem to be a little pricey to me, but if you enjoy them, they are probably worth it for you.

So, give your subscriptions a good review and make sure you still want to pay for each one every month. You may find some extra money in your budget. You may find an old subscription that you can cancel that will free up funds for a new subscription you would enjoy.  I recently cancelled a movie pass monthly subscription I had at Regal after not using it for a month or two.

Do you enjoy a good magazine subscription? What are you favorite subscriptions? Do you subscribe to something unique?