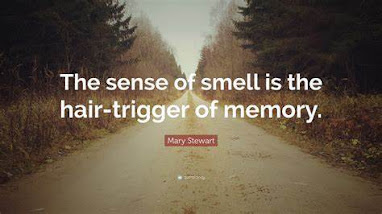 Oh those sweet memories. Our brains amaze me in their ability to store long term memories. My last post was Music & Memories and associated music with memories. Another thing that triggers a few memories for me is smell. Smell doesn't seem to attach itself to my memories as much as music but there are a few smells out there that bring out a memory or two.

If you read the last post you will remember that I had a crush on a certain cheerleader in high school. After agitating and pestering her for months, I won her over with my wit, charm and handsome good looks. One thing that drove me crazy about her was the smell of her perfume. That perfume was Sand & Sable. A whiff of that perfume today will take me back to those teenage years and our dating and early marriage life. She has long moved on to new perfumes, all which smell wonderful, but that Sand & Sable has stuck in my memories. I'm sure she could have worn Ode De Skunk, and since I was so smitten by her, I would have stored that smell into my brain with those same great memories.

Another really strong memory producer for me is not a pleasant memory. In 1995, I was across the street, in my office, from the Murrah Federal Building the morning it was blown up by a homegrown terrorist. In the days following the explosion, I was in the area assisting our office and providing security while rescue operations were being undertaken. After a day or so, Little Caesars Pizza set up a portable pizza oven in a tent in our parking lot to serve the first responders. The weather was cool and rainy during that time and you could smell the pizza being cooked every day. That pizza smell, along with the smells of the remnant of the building are deeply set in my memories. Today, I walk at a local park walking trail and across the street is a Little Caesars Pizza. On certain cool days, and with the right conditions, I get a huge whiff of pizza and with the cool weather, all of a sudden I'm back in that 1995 memory. The strength of that memory with that pizza smell amazes me every time.

My dad was a smoker. He smoked a lot of cigarettes but he also enjoyed smoking a pipe in the evening. I always loved the smell of his pipe tobacco when he packed his pipe and when he smoked it. He used Sir Walter Raleigh and Prince Albert tobacco if I remember correctly. I would use an empty tobacco can to store pennies in. Today, although very rarely, I will pass someone smoking a pipe and it reminds me of him instantly. 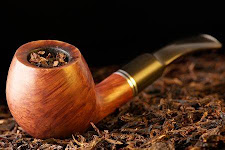 Another smell that takes me back in the time machine is the smell of fresh asphalt or at least recently laid asphalt. As a young kid and up through my late teens, I would go to Six Flags Over Texas in Arlington, TX. Their walkways around the park were asphalt and always smelled of asphalt during the hot summer months when I visited. My Sand & Sable, cheerleader girlfriend and I went at least once or twice together. Even today, if we step out of the car and smell asphalt, we will look at each other and say "It smells like Six Flags!".

Which triggers your memory more, music or smells? Do you have any smells that take you back in time to some really great memories? Any smells take you to a bad memory?