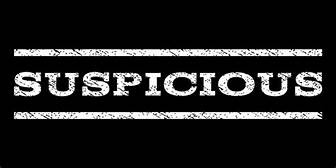 I retired after 33 years of government service with 28 years of that in law enforcement. Law enforcement officers at all levels used to be in an honorable career that garnered respect and admiration from most citizens. It was one of those professional jobs that was similar to fire fighters and military that involved sacrifice on the job and in your private life to serve and protect the public. With the "defund the police" movement and the lack of respect of police due to highly publicized incidents involving bad apples in the industry, the job comes with extra scrutiny and disrespect on the streets of America today from some citizens. There are still plenty of people out there that appreciate the job these people do to protect us everyday. I for one, detest the bad actions of a few, but still hold the rest of those who serve in high regards.

After I entered the career in 1991, my wife noticed that I thought everyone was suspicious. I think that becomes the thinking of most everyone in the criminal justice system. After you get lied to enough and you get told outrageous stories for excuses you tend not to believe in anything that doesn't have evidence to back it up. There is a humorous aspect to it because my wife will see a cute kid riding a bicycle on the sidewalk and then I will say "Yeah, but what is he up too?". She thinks that I think everyone is up to something. Most of the time I do think that. I've heard other spouses and kids of law enforcement say the same thing about their law enforcement family member. It just comes naturally to us. Or, is it that type of mindset that attracted them to the career in the first place. I can't imagine what you would feel like as a criminal defense attorney. Sure, you would have some great cases that you take on for truly innocent people. But, you would deal with so many liars, thieves and murderers that you probably don't even want to hear the excuse or the truth. A judge would be similar. Can you imagine how many sob stories a judge would hear that would prove false. I mean, even I would swear the light was yellow when I went through it.

Suspicious activity is real. Some just seem to see it more clearly and some don't see it when it is right in front of them. Today, in Walmart, I was close by my wife while she shopped. Every person that came close was a potential suspect looking to grab her purse out of the shopping cart! I see it reported on the news all the time. Of course, my wife is oblivious to all the criminals lurking around as she is elbow deep in shopping. You can't help but laugh at us and our thinking. But, I know that I have prevented her purse from being stolen at least 50 times by being alert and ready to pounce.

Even as suspicious as I am, I do believe the majority of people are good and are doing the best they can in life. I believe there are bad apples in every industry. There are a few bad cops, judges and attorneys in the criminal justice system. There are a few bad delivery drivers, office workers and factory workers as well. On the flip side, you have a large majority of people that will help you, care for you, respect you and treat you well when you need them to step up.

We all get jaded by the news we hear and the news we see. Seldom does the news report the good going on in the world. Daily, we see the news reports of thefts, shootings, murders and terrible accidents. It is hard not to think the world is in trouble. I think it has always had some problems over the years, decades and centuries and will continue to do so. We can only do our individual part to make the world a better place and give people the benefit of our doubt. We need more feel good stories about puppies, kittens, heroes and great charity work.

So, watch your purse while shopping but enjoy your shopping experience.

I've got to go, I see an elderly lady with a walker going down the sidewalk and she looks to be up to no good!