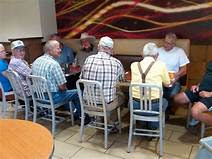 I promised the last post would set up this post and be related to retirement. If you have ever been in a McDonald's in the early morning you have probably seen a table full of retired men having their coffee and solving the world's problems. I think I have seen these groups in almost every McDonald's I've ever visited. Recently I saw a similar group at a Panera Bread. Before retirement, I admired these social clubs and thought I would join one someday when I retired. I figured it would be nice to meet regularly to work on the world problems with other like minded scholars. Back in my hometown of about 800, there was a similar group that met at the local convenience store that had a small sitting area. This was known in town as the "Learning Center". I guess it was named well because they learned about everything going on in town and with each other.

I've seen some of the McDonald's social club that look like they meet daily. I saw one club adjourning for the morning with the statement of "See you next Wednesday". So, different social clubs must have different meet times and frequency. I guess instead of a social club they should be call a McClub.

Studies have shown that socializing in retirement is good for a retiree. Some retirees are heavily involved in volunteering, part time work, church work, etc. Some also have regular social engagements such as McClub meetings, golf outings, brunch gatherings, etc. I have yet to join a social group and need to start looking. My question would be, how do you go about joining a McClub? Are there rules that say you have to be invited in like the Mason's? Can you just go up to the table and ask what the membership requirements are? I don't know if some of the McClubs are made up of lifelong friends or if they all met while getting their senior coffee at McDonald's.

I'm very interested in getting with one of these groups and working on issues such as climate change and global hunger. I believe it was a McClub that was responsible for getting the first man to the moon, but I'm not sure. I would also enjoy talking about the weather, grandkids and the price of the senior coffee if that is where the conversation leads.

Are you involved in a McClub or something similar? Do you know the secret handshake or secret rules to join a McClub?  Does your town have a "Learning Center" where all the local scholars meet regularly? Any unique social gatherings out there? I do attend two metal detecting club meetings a month as part of my social engagement in retirement. Do you attend hobby club meetings as a social engagement?