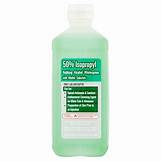 Big Grandma believed in a miracle cure that would cure anything that ailed you. She kept several bottles around the house and would dab it on any type of wound. She swore that if you cut off a finger you could soak it in her miracle cure and a new one would grow back! Her miracle cure.....green alcohol! It smelled awful and looked terrible in it's milky white bottle up on the shelf. I avoided her putting any of it on me. Google says it may have a cleansing effect on minor cuts and scrapes. I would imagine that would burn like everything! I picture in my mind the old west shows where they would pour alcohol on a gunshot wound and the gunshot victim would scream like the alcohol was worse than the actual gunshot. Grandma, no thanks!

My dad had his own miracle cure. He also thought his cure could grow a new finger. His cure......Mercurochrome! Every time we got a cut, scrape or bite we would break out the bottle of Mercurochrome and use the stiff plastic applicator attached to the screw on lid to dab the red stuff on our wound. It would sting and it would dye your skin red. I think it had a nickname of "Monkey blood". Google says it was used as a mild antiseptic. Google also says it is not longer available in the US. The FDA decided there were two issues with it. One was that it contained Mercury which is no good for our body. The second issue was that it dyed your skin red and could mask an infection. I had a few doses of this stuff in my childhood. Thanks dad! I should have switched to grandma's miracle cure!

Another medicine we used the same a Mercurochrome was Campho-phenique. It was in a tiny green bottle and we used it mainly on mosquito and other insect bites. Thank goodness, there is no FDA issue with Campho-phenique.

Do you remember any cures that your parents or grandparents swore by? Do you have any today that you tout as having healing powers? Just thinking about all this brings back memories of the cuts, scrapes and bruises that I had as a kid and all the awesome experiences that I had while obtaining said blemishes. 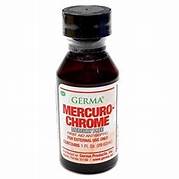 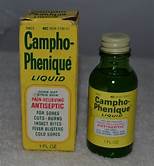