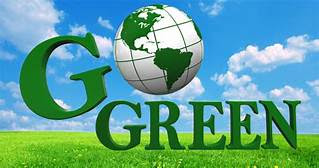 I like the green movement and the idea of using renewable energy such as solar and wind. I think it is awesome that someone can harness the sun's energy from their rooftop to power their household needs. We currently don't own very many "green" products but the idea interests me. The idea of having a plug in electric car sounds pretty cool and is getting more affordable every year. We now see Tesla cars and other plug in cars more often that we ever have. The only "green" items that I can think of that I own include a battery powered blower and trimmer for the yard. My previous versions of these were gas powered, so I now consider myself someone who is going green. I also have rechargeable batteries I use in my metal detecting hobby. I guess that will prevent a few batteries from making it to the landfill.

There are battery powered lawn mowers that are on the market. I understand that they work great. Even better, would be one of the automated mowers that act as a roomba for your yard. I think those are still pretty expensive at this time.

I tried a compost pile for a couple of years at our last house. I never got it to the point that I was using soil out of it, but at least I tried. Our car is a Subaru and gets pretty good gas mileage. Our truck is a Toyota Tacoma and gets decent mileage for a truck. I say all of that to say that is about the total of my green efforts and I know I could probably do more. I have used a paper straw a few times the last couple of years at various restaurants that have started using them. But, those few paper straws don't cancel out the many, many plastic straws I have also used. Sometimes after eating a fast food meal, I am amazed at the amount of trash one person or one family can produce with just one simple lunch. That area could definitely use some improvement.

Part of the movement is to recycle, reuse and reduce. We do participate in curbside recycling and we love to reuse by shopping at thrift stores. Recycling varies across the country. Some cities are very vigilant in recycling while others have no program at all. We visited Portland, OR a few years ago and the city is one that is vigilant in recycling. The state has a mandate that all cities with a population of 4,000 or more must have a recycling program. I don't think such a mandate exists in most states. While in Portland we heard stories that you could be fined if a recyclable item was found in your regular trash. Now that is serious! If we are ever to get serious about recycling in this country we probably need a national mandate of some sort to get everyone on the same page. One city we lived in charged $3 per month to cover the cost of the recycling program. I have no problem with that at all.

Some people have embraced solar energy, some do simple things like compost and use rain barrels. Some have built green homes that use ultra energy efficient building materials, appliances, etc to help the environment. Some people have battery powered mowers and electric cars. Some have given up cars and use bikes or public transportation to cut emissions.

Have you embraced any green practices? If so, what are they and are you satisfied with the products or the actions you have taken?  How about recycling, does your city or state have a good program?