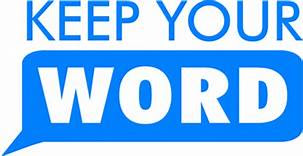 "To keep one's word" is to do what one promised.

A person's word used to be worth everything. In modern times, it often appears that keeping your word means very little. Keeping your word builds people's faith and trust in you and makes you someone your friends and family can depend on. I have often sold items on craigslist or Facebook and had potential buyers promise that they would purchase the item or promise a day or time to meet and then never respond again and never show up. This is a small example of keeping your word. A larger example would be Bernie Madoff who recently died in prison for defrauding thousands of people of $65 billion  Madoff had promised these people he would take care of their money and most lost everything. Keeping your word is rarely done in the political world. You usually get told what they think you want to hear to garner your vote and then they do something that is totally opposite once in office.

Keeping your word can be as simple as showing up on time, doing small chores or favors. Or it can be as complicated as taking care of larger items such as probating a will or raising someone's children after a tragic death. One of the biggest promises made that gets broken all the time is the promise at marriage to stay faithful and true in any circumstance. That promise is tossed away these days as if it means nothing.

I know you are tired of hearing about Evel Knievel in this blog, but I am reading his biography and learning more about the man. One of his good qualities was his devotion to keeping his word. Knievel often made jumps that he knew were not going to be successful for the simple reason that he promised that he would. If he promised to jump 16 cars, he would attempt to jump 16 cars even if he didn't feel physically sound or if his motorcycle was not running perfectly. He would often have these doubts before a jump or at the top of the ramp but knew he had promised the crowd he would make the jump. To me, he took his word a little to seriously in these situations. He could have gracefully declined to jump because of issues that made it unsafe. I think that would not have diminished "keeping his word" under those circumstances. But to Knievel, he felt that he had to keep his promise even if it meant injury or death. You have to admire a guy for that kind of commitment, and then shake your head and say "that dude's crazy!".

I can only think of one time where a man gave his word numerous times to me and failed to follow through on something major. In the late 1990's, I had purchased a 1973 Mustang convertible. It needed a lot of bodywork repair and a new paint job. I got a great quote at a local body shop and the shop owner was as nice as could be. He made promises on everything he could do to the car and gave me a great price and quick turnaround estimate. I fronted some of the money to help with supply costs. After months of back and forth with this guy, and numerous promises to complete the job, the car was not done. Every few weeks I would check on the progress and get new excuses and new promises. He had financial issues and moved his shop, and my car, to another location. Another few months of back and forth and I finally got my car back with a shoddy paint job. I was just happy to get the car back and in decent shape. This man had given me "his word" many times, and kept breaking it time after time. I was so upset and bitter with this guy. I later found out that he had a cocaine problem and went to prison. After prison he showed up at my house one day to apologize for his past behavior and again gave me "his word" that he would pay me back for my losses. As you can guess, I never heard from this guy again.  Sure, I've had the small disappointments in selling something and the person not show up or respond as promised, but nothing more serious than the car issue. I can't imagine losing a large some of money due to fraud or losing a marriage due to infidelity or losing a good friend due to lies and deceit.

In life and in retirement, we all need to strive for the reputation that we are trustworthy, honest and that we will keep our word. If you promise something, follow through, or at least explain why you can't keep the promise. Most of us are understanding if we are told that something can't be accomplished due to a legitimate reason. Surround yourself with people who keep their word. These are the people you can depend on when times are bad and who will celebrate with you when times are good.

Have you had any major issues with people breaking their word and their promises? What is your take on someone's "word"?